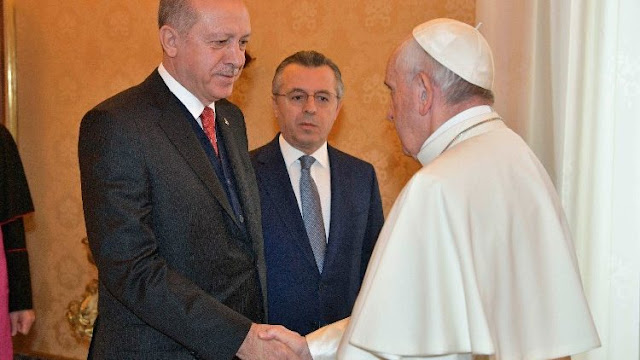 Pope Francis met with the President of Turkey, Recep Tayyip Erdogan, and his entourage on Monday at a private audience in the Vatican’s Apostolic Palace.
It was the first time in 59 years that a Turkish president has visited the Vatican.
A statement from the Holy See Press Office said their discussions were “cordial” and that the two men spoke about the two states’ bilateral relations.
The Holy Father and President Erdogan spoke about “the situation of the country, the condition of the Catholic community, efforts in the reception of the many refugees, and the challenges linked to this.”
They also discussed the situation in the Middle East, giving special attention “to the status of Jerusalem”.
Pope Francis and Turkey’s president, it said, highlighted “the need to promote peace and stability in the region through dialogue and negotiation, with respect for human rights and international law.”
At the end of their meeting, Pope Francis gave President Erdogan a bronze medallion depicting an angel embracing the northern and southern hemispheres while overcoming the opposition of a dragon.
President Erdogan afterwards met with Cardinal Secretary of State Pietro Parolin and Archbishop Paul Richard Gallagher, Secretary for Relations with States. 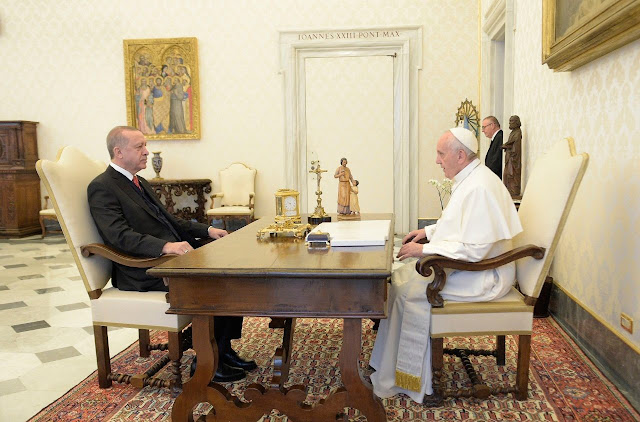